How Fast Does a 150cc Dirt Bike Go? The Complete Guide

When it comes to dirt bikes, nothing is as important as speed. Whether you’re racing on a track or cruising around your yard, the ability to zoom past your friends and neighbors is one of the best parts of owning a dirt bike.

So how fast does a 150cc dirt bike go? The answer depends on what kind of engine you have under the hood.

Also Read: The Fastest Dirt Bikes in the World

The 150cc dirt bike is the most common type of motorcycle. It is also one of the most popular motorcycles for beginners to ride. The term “dirt bike” refers to the fact that this type of motorcycle was originally designed for use on dirt roads and trails instead of paved roads.

However, today, many people use their 150cc dirt bikes on paved roads as well. In general, these motorcycles tend to have an average speed of about 50-60 mph.

The following are factors that affect the speed of a 150cc dirt bike. 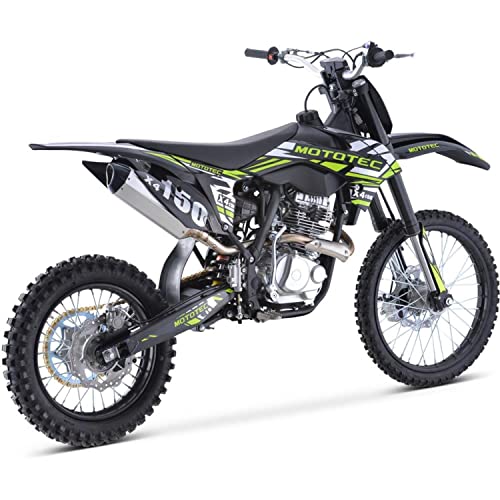 The engine type will impact the bike’s speed. Some dirt bikes have engines that are more powerful than others, which means that they can reach higher speeds. The engine type also impacts how much fuel is used during a ride and what kind of maintenance it requires.

The brand of a dirt bike can affect its speed in many ways, including how well it handles rough terrain, how sturdy it feels when you’re riding it, how comfortable it is to ride, and how much maintenance it requires after each use.

Dirt bikes are designed to be fast and agile, allowing them to take on various terrains and obstacles easily. While many factors help determine how fast a dirt bike can go, age is one of the most important.

The older a dirt bike gets, the more likely its performance will decrease over time. As dirt bikes age, they become less durable and require more maintenance than newer models. This means that you’ll have to spend more time maintaining your dirt bike as it ages, which means less time riding it.

Since it’s made up of mostly lightweight materials, a dirt bike is not built to handle heavy riders or passengers. If you’re over 200 pounds and ride a 150cc dirt bike, you won’t go as fast. You’ll also need to ensure that your bike has a good suspension.

Riders who have more experience with bikes are likely to be able to ride faster than those who have less.

Another factor that influences how fast a bike can go is its weight. The heavier the bike, the harder it will be for you to control it. If you want to ride fast, you should try choosing a lighter bike so that you can easily control.

The quality of the track surface directly impacts how fast you can go on your bike. The tracks must be flat and free from bumps. Bumps slow you down and can damage your bike.

If you are riding in an area with many large rocks or other debris, going fast will be very difficult because these obstacles will slow you down or stop you completely. You should also avoid riding on snow or ice because it will make it difficult to ride without falling off your bike.

What Exactly Does 150cc Mean in a Dirt Bike?

Let’s talk about what exactly 150cc means in a dirt bike and how it differs from 200cc or 100cc. 150cc refers to the engine’s displacement (or volume), which is measured in cubic centimeters (cm³). The larger the number, the more power your bike can produce. This doesn’t mean that a 200cc bike will always be faster than a 150cc one—it just means that it has more potential for speed as long as you maintain it properly and keep up with maintenance requirements.

What Are the Fastest 150cc Dirt Bikes?

The fastest 150cc dirt bikes are designed for use on a motocross track. The higher the number of cc’s, the more powerful the engine. The best way to choose a fast 150cc bike is to consider your riding style and needs.

If you’re looking for the fastest 150cc bike, you’ll want something that can go off-road but have enough power to fly over obstacles and through mud pits. You also want a bike with great handling so that you don’t lose control while going over bumps and jumps. The following are some of the fastest 150cc dirt bikes:

The Honda CRF150R is a lightweight motorcycle that packs a lot of punch. It has a 149cc liquid-cooled engine and can reach speeds up to 70 mph. The bike also has a five-speed manual transmission and an electric start system for easy starting. Additionally, it has a centrifugal clutch with automatic decompression for smooth shifting. It comes with front and rear disc brakes for added stopping power.

The engine on the Husqvarna TE 150i has a displacement of 144cc, making it small enough to be light and elegant but large enough to give you a lot of power. It can reach a top speed of up to 60 mph. The engine is liquid-cooled, which prevents overheating and keeps maintenance costs down because fewer parts are involved in keeping the engine running smoothly.

This KTM 150 SX is a powerful, lightweight motorcycle. It has a 143.9cc engine capable of delivering a maximum speed of 73 mph. The bike also features an aluminum chassis with a tubular steel frame, making it light yet strong. The bike also comes with disc brakes on both wheels, which offer superior stopping power even in wet conditions.

The RFZ ENDURO 150 is equipped with a 150cc engine. The engine has enough power to get you up to speeds of 60 mph, and it can reach that speed in just 5 seconds. The bike weighs in at just under 150 pounds, so it’s not too difficult to pick up when you need to move it around. Both wheels have disc brakes offering complete control in all conditions.

The speed of a 150cc 4-stroke dirt bike depends on several factors. These include the weight of the rider, terrain, and overall conditions. The average speed is around 60 mph. However, some riders have been known to reach speeds as high as 80 mph.

The maximum speed can be affected by factors such as:
– The size of the rider and how much they weigh
– The type of tires used on the bike (tires can affect traction)
– Whether or not it’s raining out

The top speed of a 150cc 2-stroke dirt dike is around 50 mph. As mentioned above, the speed depends on various factors not always directly related to the bike.

Is a 150cc dirt bike ideal for adults?

Yes, a 150cc dirt bike is ideal for adults of varying ages. Children should not be riding these bikes.

The average height of a 150cc dirt bike is about 5-6 feet. This number can vary depending on the seat height and style of the bike. The typical seat height for a 150cc dirt bike is usually between 36 and 38 inches from the ground to the middle of the seat. This means that if you were 5 feet tall, you would be able to ride this type of bike easily.

When you want to purchase a motorcycle or upgrade from your current dirt bike, the first thing you need to do is understand the specifications. First and foremost, the purpose of a 150cc dirt bike is not transportation; it is recreation.

While these bikes can be used for commuting where there is no other option, they are meant for enjoyment. These smaller bikes are lightweight and more maneuverable than larger bikes. If you’re purchasing your first dirt bike, you can pick one from our list above.