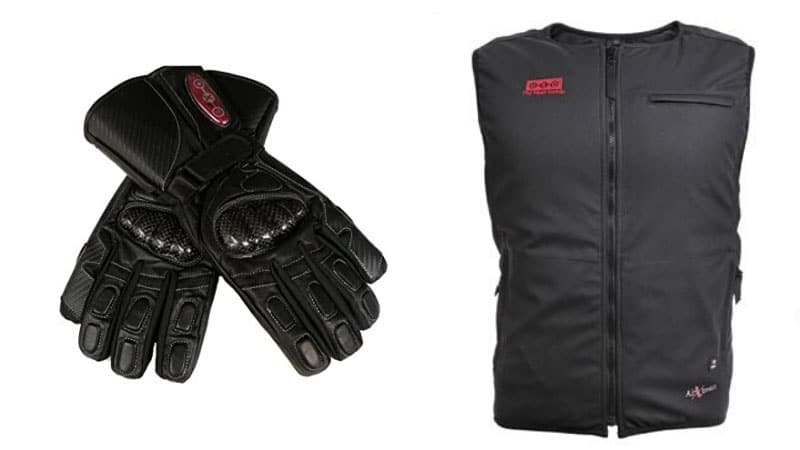 Winter Schminter. Most riders in the northern hemisphere decide to put their motorcycles away when the first snowflakes start to fall. But why? A little cold never hurt anyone...

For the past few weeks I've been riding around in the SormRider Body Warmer and the StormShield Heated Motorcycle Gloves, and despite the fact that I live in Chicago, I'll continue riding into and through the new year.

Simply, EXO2's gear is going to keep you warm. Riding in 20 degree weather at highway speeds isn't much of a problem when you have EXO2's Fabrock heated technology wrapped around your body. In fact, the only thing that bothered me were the strange looks that I got from perplexed drivers.

Of course, there are plenty of products on the market that can keep you warm on the road. So what sets Exo2 apart?

One of the worst parts about winter riding is waiting for your gear to heat up. That isn't much of a problem with the StormGuard Heated Motorcycle Gloves or the Stormrider vest. Within 10 to 15 seconds you can feel the heat coming through and in another minute, you'll forget what season it is.

The Set up was also relatively easy. The gear is connected directly to your battery so there isn't any need for cigarette lighters or other power outlets. Five minutes, a screwdriver, and the supplied chord is all you need to hook up your gear.

Although I was pretty impressed and extremely satisfied with EXO2's gear, I did have a few qualms with the product. My first and most arbitrary complaint is that the zipper is on the wrong side. Exo2 is a European company and for some reason they put the zipper on the left. This is, of course, not really a big deal. 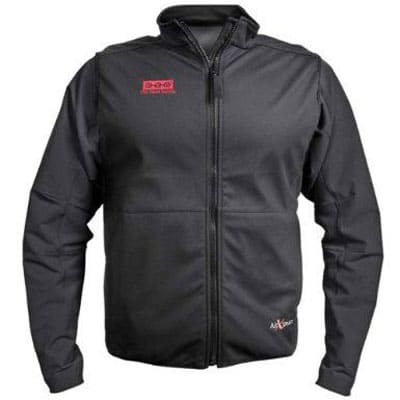 What the EXO2 Stormrider was lacking, however, was a harness system for the wires. Once you connect the cable to the battery you have to find a place to mount the wire. It's a small detail that took a little improvisation. The good news is that once you have it installed you never have to touch it again. Just turn the bike on, plug your gear in, and you're off.

Another cable issue I noticed was that the connectors easily came loose if you tugged at them. This is, or course, a blessing and a curse. When you're wearing bulky gloves you're going to need all the help you can get. I could easily plug in and out with my gloves on. The problem was that it was too easy. I had to modify my initial set up because I kept knocking the wire loose when I turned my body.

EXO2 does offer a number of accessories to deal with the problem. For one, the gear can be connected to a battery pack so you can bypass the whole wire harness problem altogether.

When all is said and done, Exo2's gear is going to make you enjoy winter riding. There's practically no wait for the gear to warm up, it's easy to install, and it's easy to use.

The Stormwalker vest is a thin, lightweight, windproof and waterproof vest that doesn't add too much bulk to your riding gear. I was able to comfortably wear the vest under my jacket without, surprisingly, sucking in my gut. The vest doesn't only heat up fast, but it retains heat for a while after you turn off the bike. So much so that I actually had to contact EXO2 to make sure there wasn't some charge feature that I was missing out on.

"No, the vest doesn't charge," said Drew Walston, President and CEO of EXO2. "That just speaks to the quality of the product. It really is fantastic at retaining heat."

The gloves also did a great job of keeping my hands warm. I ride with a windshield, so the vest wasn't getting hit with a steady force of wind. But the gloves, well, they were out in the open the entire time. Luckily, EXO2 puts the heat where it matters and my fingers were nice and toasty all day long. The gloves also function surprisingly well in their own right. They definitely have a little bit more bulk to them than my typical riding gloves, but I was able to zip jackets, secure helmets, and most importantly, rip back the throttle with ease.

Right now it's the second week of December, in Chicago, and for the moment, the end of the riding season is no where in sight.