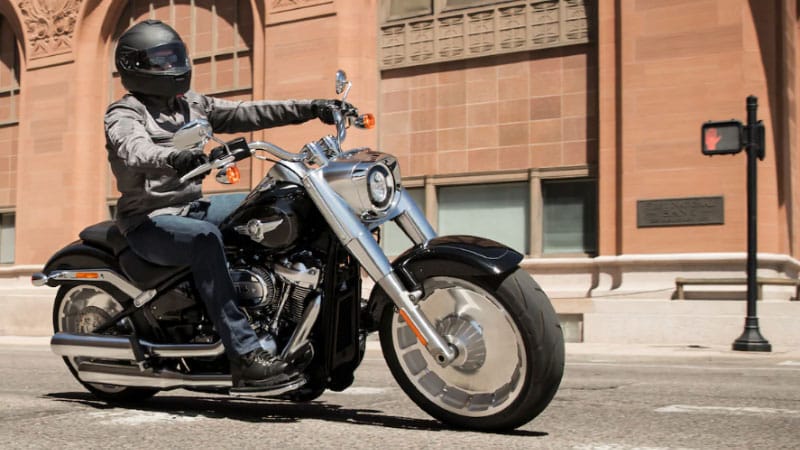 The origin of the Harley-Davidson Fat Boy, and the entire Softail line, goes back to a garage in St. Louis in 1974. Bill Davis was a bike customizer who preferred the look of the single piece hardtail frames, but he also enjoyed long distance riding. The lack of rear suspension on the hardtail motorcycles made long rides on them uncomfortable.

Davis developed a system that hid a shock absorber under the seat of his 1972 Harley-Davidson Super Glide. He continued to work on his suspension system and presented it to Harley-Davidson in 1976. After several years of negotiations and further refinements Harley and Davis reached a deal in 1982. The Motor Company unveiled the new design on the 1984 Softail. 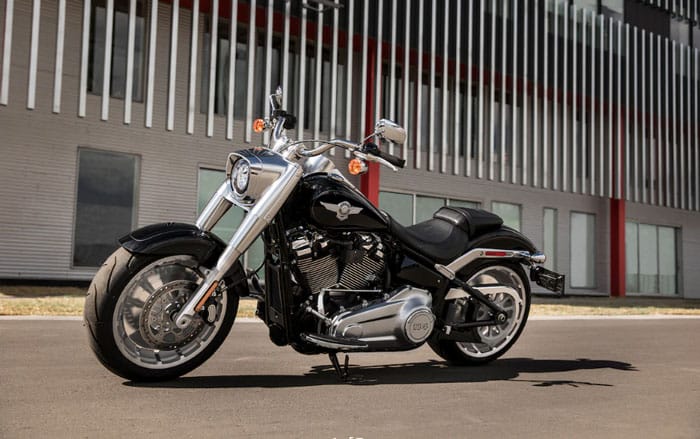 When the first Harley-Davidson Fat Boy hit showroom floors for the 1990 model year it was an instant success. It was dubbed “The Grey Ghost” since that first model was only available in grey. The Fat Boy had unique styling, including cast aluminum wheels, rider floorboards, a wide fuel tank and fat front fork. Harley-Davidson equipped the bike with the 1340 cc Evolution engine, five-speed transmission and belt final drive. 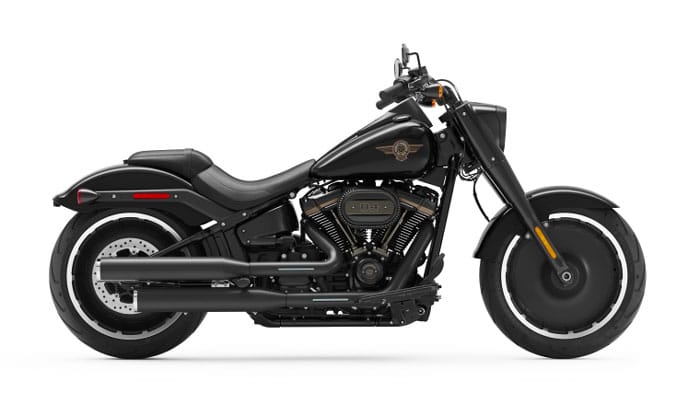 Harley-Davidson introduced a new engine, the 1450 cc Twin Cam 88 in 1999 on its Dyna and Touring families. In 2000 the Fat Boy and the rest of the Softail line got a counter-balanced version, the Twin Cam 88B, mounted directly to the frame. The 2001 Fat Boy got fuel injection. 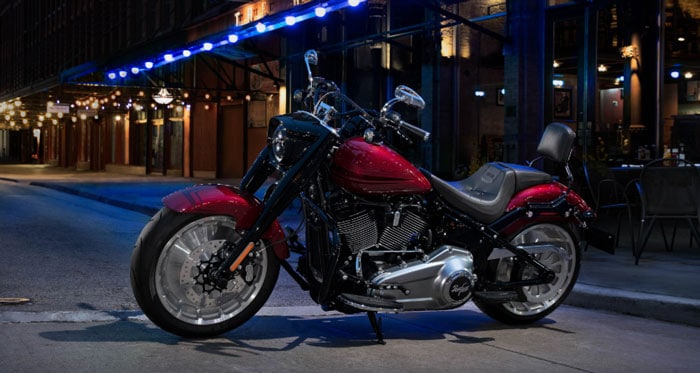 The Fat Boy Lo joined the Harley-Davidson line up for the 2010 model year. The Lo got a new style seat and lowered suspension to give it the lowest seat height of any Harley at the time at 24.25 inches. The Fat Boy Lo also featured a new leather tank panel, bullet hole disc wheels and new darker look, available in Vivid Black or Black Denim.

An urban legend has dogged the Fat Boy almost since it first hit the market. The story goes that the name “Fat Boy” is taken from the nicknames of the two atomic bombs dropped on Japan to end World War II. The bombs were named “Fat Man” and “Little Boy”. 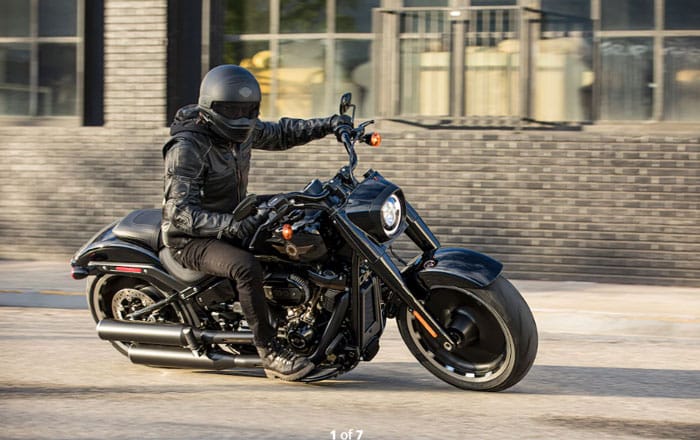 The legend also cites that the bike's original color, grey, was the same as the two B-29 bombers, the Enola Gay and Bock's Car, that dropped the bombs. Further “proof” comes from the disc wheels on the Fat Boy which were similar in style to those used on the B-29 bombers. Harley-Davidson has vehemently denied the rumors.

One of the most memorable appearances by the Harley-Davidson Fat Boy in movies is the 1990 Fat Boy ridden by actor Arnold Schwarzenegger in the 1991 movie “Terminator 2: Judgement Day”. Schwarzenegger plays the Terminator, a futuristic T800 model cyborg.

In one scene the Terminator jumps his Fat Boy into a street drain. Stuntman Peter Kent actually did that scene. The stunt was accomplished by supporting the Fat Boy on one-inch cables, which effectively reduced the weight of the bike and rider to 180 pounds as they hit the ground. The cables were removed from the scene in post production.

After the movie was finished, executive producer Mario Kassar added the Fat Boy to his personal collection. He later sold it to another individual who subsequently sold it to the Hollywood Star Cars Museum in Gatlinburg, Tennessee where it is still on display today.

“Wild Hogs” is the story of four middle-aged wanna be bikers from Cincinnati who take a road trip to the west coast. Along the way they run into a New Mexico biker gang, the Del Fuegos. Doug Madsen, played by actor Tim Allen, and Woody Stevens, played by actor John Travolta, both ride Harley- Davidson Fat Boys. Several members of the Del Feugos are also seen riding Fat Boys.

The Harley-Davidson Fat Boy appears in two episodes of the final season of the ground breaking series The Sopranos. Vito Spatafore, played by actor Joseph R. Gannascoli, has been outed and flees to New Hampshire in search of a cousin who lives somewhere in the state.

In a small town Vito meets and moves in with Jim “Johnny Cakes” Witowski, played by actor John Costelloe. Witowski owns a diner and is a volunteer fireman who rides a Harley-Davidson Fat Boy. The Fat Boy appears in two episodes, “Live Free or Die” and “Johnny Cakes”.

In the 1992 “The Keys” episode, Kramer, played by actor Michael Richards, takes off for California. On his way he hitches a ride on the back of a Harley-Davidson Fat Boy driven by actor Eric Allan Kramer.

In a case of stolen identity it's revealed that Armin Tamzarian has been posing as Springfield Elementary principal Seymour Skinner, both characters are voiced by actor Harry Shearer. One of the facts revealed about Tamzarian in the 1997 episode “The Principal and the Pauper”, is that he rides a Harley-Davidson Fat Boy.

The Fat Boy has been spotted in the background in a number of other movies and TV shows, including Sons of Anarchy, CSI: Miami, and Law & Order: Los Angeles. In his 2009 music video, “American Ride” Toby Keith rides a Fat Boy.