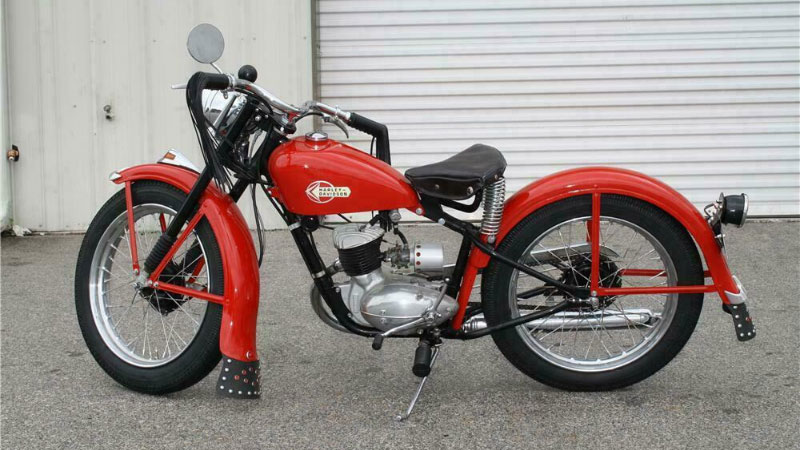 The roots of the Harley-Davidson Hummer can be traced back to pre-World War II Germany and the auto and motorcycle manufacturer DKW. Through the 1920s and 1930s DKW was one of the largest motorcycle companies in the world. DKW introduced the RT 125, a single-cylinder, two-stroke, 125 cc, air-cooled motorcycle in 1939.

As the war progressed, DKW suspended production of civilian models and began producing a version of the RT 125 for the German military. With the defeat of Germany, DKW was forced to turn over plans for the RT 125 to the Allies. Britain’s BSA Bantam, the Soviets M1A Moskva and K-125, and the Polish WFM SHL 125 and Sokol 125 were all based on the design of the DKW RT 125. 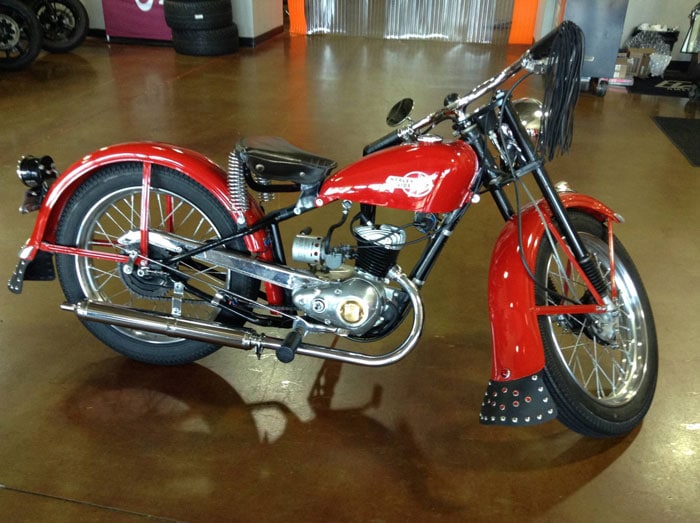 Eventually Yamaha produced the YA-1 using the DKW plans. In the U.S. Harley-Davidson used the plans to produce the Model S-125. From 1948 through 1966 Harley would produce a variety of lightweight motorcycles from 125 cc to 175 cc. In retrospect they are all referred to as “Hummers”, though there was only model that officially bore that name.

Harley-Davidson introduced the Model S-125 in 1948. This was the Motor Company’s first lightweight bike and they would produce a number of models through 1966. The S-125 had a single-cylinder, two-stroke, 125 cc air-cooled engine, rigid frame and girder-type front suspension employing five large rubber bands. 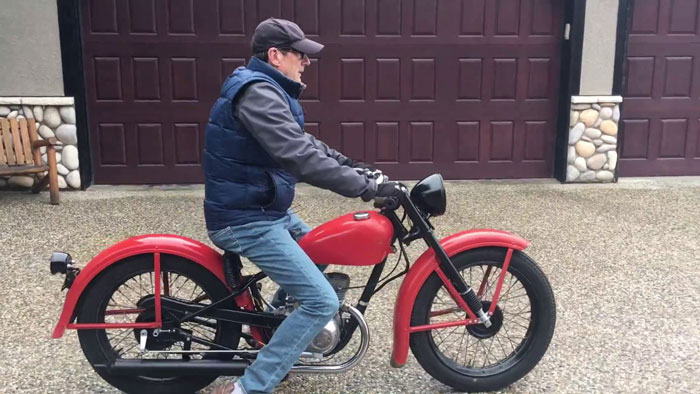 For the 1953 model year Harley-Davidson dropped the Model S-125 and replaced it with the Model ST-165. Besides the larger 165 cc engine, which generated 5.5 horsepower, the new model got a body redesign. Harley produced the ST-165 through the 1959 model year.

By the mid 1950s competition in the lightweight motorcycle market was gearing up in the U.S. with increasing imports of inexpensive Japanese models. Sales of the Harley-Davidson ST-165 were slumping across the country, except for Omaha, Nebraska. Dean Hummer’s Omaha Harley dealership led the nation in sales of the lightweight S-125 and ST-165 models. 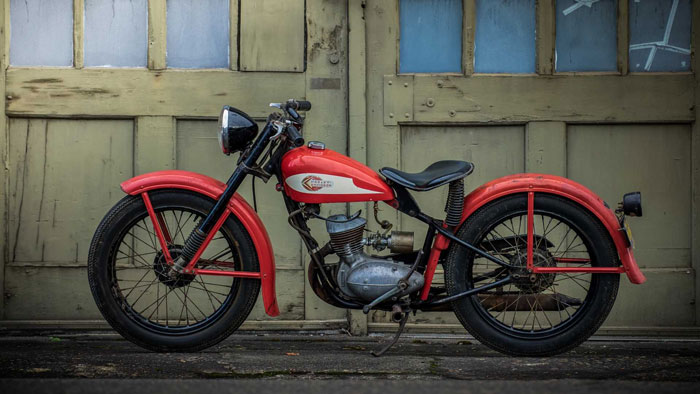 Harley-Davidson had been planning to introduce a new, stripped down 125 cc motorcycle to compete with the imports. Given the sales success of Dean Hummer’s dealership, Harley-Davidson dubbed the new model the Hummer. Harley introduced the Hummer for the 1955 model year.

The Harley-Davidson Hummer was truly a no-frills motorcycle. The 125 cc, single-cylinder, two-stroke, air-cooled bike had no battery, using a magneto instead. The Hummer had no brake lights, no directional signals and had a squeeze-bulb horn. A speedometer was available as an option. Harley gave the Hummer the Tele-Glide front suspension, three-speed transmission and a peanut-shaped gas tank that held 1 7/8 gallons. 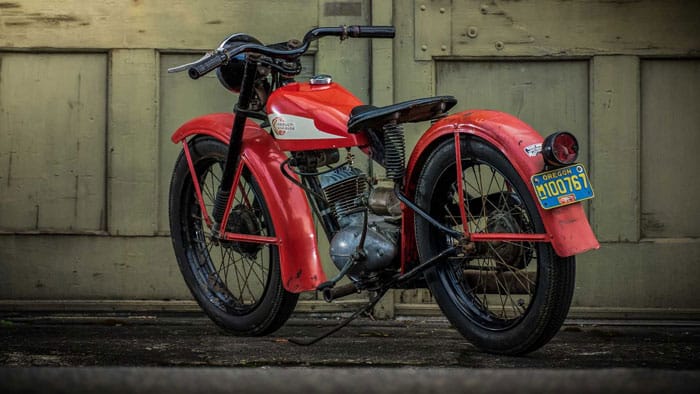 Harley-Davidson marketed the Hummer as inexpensive to buy and inexpensive to own. Advertising for the new 1955 Hummer claimed the lightweight motorcycle got up 100 mpg and could be operated for only thirty-five cents a week, if you lived 10 miles from work.

With a minimum down payment, monthly payments on the new Hummer were advertised for as low as $17 per month. Suggested retail on the 1955 Harley-Davidson Hummer was $320. Harley continued to produce the 125 cc Hummer through the 1959 model year.

Despite the low price of the Hummer, Japanese imports continued to dominate the lightweight motorcycle market. For the 1960 model year Harley-Davidson discontinued both the ST-165 and the Hummer. The Super-10 was the sole entry in Harley’s lightweight line up for both the 1960 and 1961models years. The Super-10 had a 165 cc, single-cylinder, two-stroke, air-cooled engine.

The Harley-Davidson Ranger, SCAT, and Bobcat

Sales of the Super-10 were lackluster and it was replaced with three new motorcycles for the 1962 model year. The Ranger, which maintained the 165 cc engine, and the 175 cc Pacer and a trail bike named the SCAT. Harley-Davidson dropped the Ranger after only one year. Both the Pacer and the SCAT received new Glide-Ride rear suspension for the 1963 model year. Both models remained in the line up through the 1965 model year. 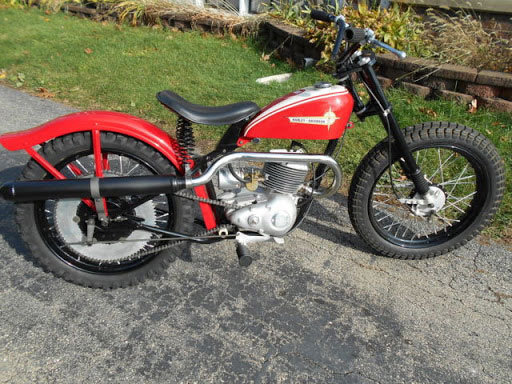 Harley-Davidson introduced their final entry to the lightweight motorcycle market for the 1966 model year, the Bobcat. The 175 cc Bobcat had a unique one-piece fiberglass body that foreshadowed the styling of the Harley-Davidson Super Glide. The Bobcat was pulled from production after only one year.

Twenty years after the last Harley-Davidson Hummer was manufactured, Dave Hennessey bought an old Hummer for $10. In 1982 Hennessey started “Hummer News” and founded the Harley Hummer Club. Hennessey incorporated the club as a non-profit organization in 1997. The Harley Hummer Club is represented at many Antique Motorcycle Club of America (AMCA) events and has an active website.