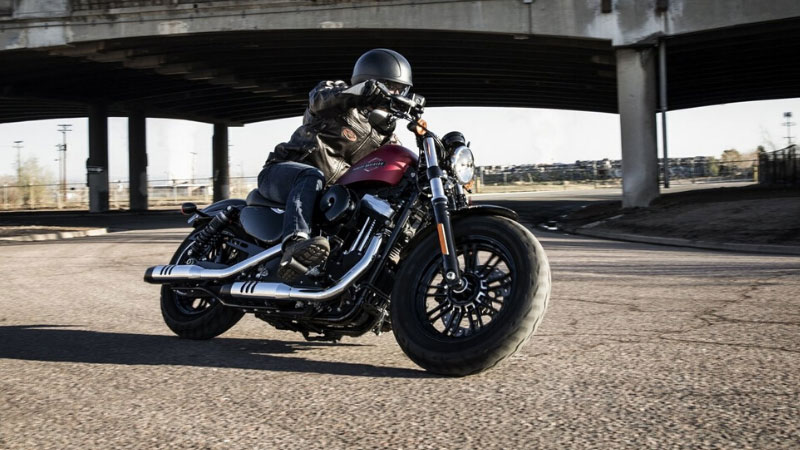 One of the most distinctive styling elements of the Forty-Eight is the peanut tank. And as a tip of the hat to the year the tank was introduced, Harley named the new for 2010 Sportster the Forty-Eight (never "48").

Background of The Harley-Davidson Forty-Eight

The inspiration for the Harley-Davidson Sportster Forty-Eight predates the first Sportster model, introduced in 1957. Based on the German DKW RT 125, Harley introduced the S-125 in 1948.

One of the distinctive features of the S-125 was the 1.875 gallon peanut fuel tank. By 1952 the capacity of the tank had been increased to 2.1 gallons, and when Harley-Davidson introduced the Sportster family in 1957 they were fitted with the tank. Sportsters continued to use the 2.1 gallon tank, as standard equipment or an option, through 2007.

Things weren't looking good for Harley-Davidson or the motorcycle industry in general in 2007. Motorcycle sales in the U.S. had fallen for the first time in years. Harley's sales decreased 1.8% for the year. And the biker population was aging, in the mid 1980s the average motorcyclist was 24 years old, by 2008 that had jumped to 43.

To appeal to younger riders Harley introduced a new design theme, the Dark Customs. Not a distinct model family in its own right, the Dark Customs belonged to already existing families, like the Sportster Nightster and the Softail Cross Bones. What set these bikes apart was the minimal use of chrome, dark color schemes and raw image they evoked. Designers wanted the Dark Customs to be reminiscent of the bobbers of the late 1940s when motorcycles were still equated with rebelliousness.

Introduction of the Sportster Forty-Eight

The Forty-Eight was unveiled at the 2010 International Motorcycle Show in New York. The bike had a low slung look with a seat height of 26.8 inches. Its blacked out engine, air cleaner, frame and fenders put it solidly in the mold of earlier Dark Custom models.

Minimalist styling on the Forty-Eight included a one piece solo seat, the smallest on any of the Sportsters, chopped fenders and two rear lights that did multiple duty as brake lights, running lights and turn indicators. The side mounted license plate holder, low rider drag-style black handlebars with under mounted rear view mirrors, fat front tire and forward mounted foot controls added to the retro bad boy image of the Forty-Eight.

Reaction To The Sportster Forty-Eight

Since its introduction in 2010, critical reaction to the Sportster Forty-Eight has been mixed. Most reviewers were instantly enamored of the Forty-Eight's style. But once critics threw a leg over that low seat the reviews were often less than stellar. Because Harley chose to so severely slam the suspension, the Forty-Eight has only 3.62 inches of travel up front and a measly 1.62 inches in the rear, the slightest bumps proved jarring, especially for heavier riders.

Tall riders complained of difficulty using the under mounted mirrors, while average height riders felt they were adequate. One of the biggest complaints concerned the feature that gave the Forty-Eight its name, that 2.1 gallon peanut fuel tank. Even with a healthy estimated combined city and highway 48 mpg, the Forty-Eight has a limited range of just over 90 miles per tank.