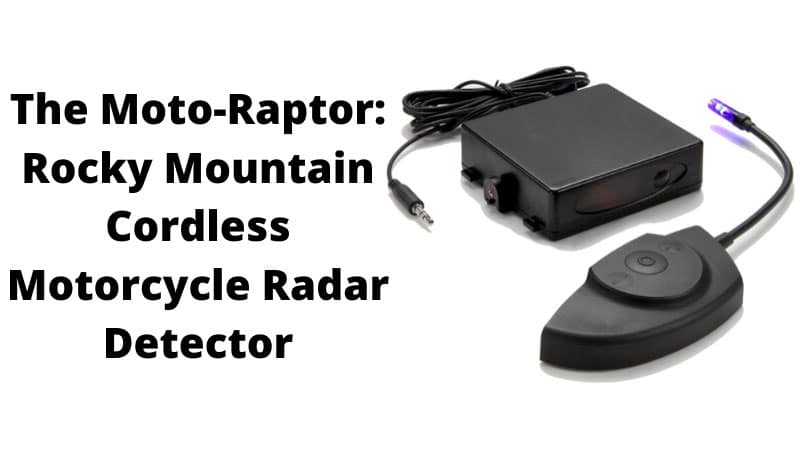 The Moto-Raptor from Rocky Mountain Radar is one of the only cordless, wireless, motorcycle-only radar and laser detector systems on the market. With 360-degrees of detection right around the bike, the Moto-Raptor warns you in advance of approaching policeman with speeding detection equipment turned on whether they following you, in front of you, or coming at you from the side. 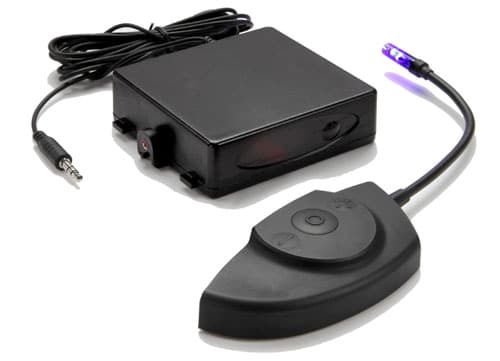 Rocky Mountain Radar's Moto-Raptor is an absolute piece-of-cake to fit. You mount it under the nose of the bike with a bracket and two little screws, then run a wire to your battery. You should use a cable tie on the wire so that is doesn't catch on anything hot, then you just have turn your Moto-Raptor on.

The wireless helmet speaker and receiver mount's to the side of your lid with the speaker tucking nicely into the lining.

The wireless mount needs charging and once live it automatically connects to the detector when you turn the engine on. It beeps to tell you it's live and a little blue light on the end of a flexible rod allows you to see any action from the detector at night.,

This visual portion of the detection unit takes a little getting used to, but the blue light next to your nose turns out to be an excellent warning mechanism. The detector beeps very slowly once it detects a signal and as you get closer to the source both the beeping and blue light flashing increases

The laser detection is instant with no gradual sound increase -- basically, if a laser is pointed on you and you detect it, jump on the brakes fast.

I also have a Rocky Mountain Detector system in my car and that one has a laser blocker built in. It scrambles the signal so that the police get a false reading which gives you a little time to slow down. This detector for the motorcycle doesn't have such a mechanism which is unfortunate because I have seen its value personally in my car. Hopefully one day Rocky Mountain Radar will include a laser blocker in the Moto-Raptor model.

Final Thoughts on the Moto-Raptor

I have to say the Moto-Raptor is very easy to use, very technologically friendly, and gives you piece of mind wherever you ride.

Everyone that rides a motorcycle needs a radar detector. Whether you are riding in PA and need warning of the police behind the bridges and trees or in Ohio or Massachusetts where moving radar is their weapon of choice, there is never a journey that a detector wouldn't give you piece of mind.

Let's face it, who from time to time doesn't break the speed limit even if its only a little?

No tickets-Reviewed by Julian Taylor

This product really works. Everytime a police car came towards us with the radar detector on it went off, and with loads of time to spare.

Keeping the license clean-Reviewed by Vertical

This baby works. I have used one for over six months now and still have a clean license. I have had to jump on the brakes quickly especially when you see the blue light in the corner of your eye from the helmet mount, but it's worth it in the long run. I wish it was a little louder, or maybe I am deaf after all these years of riding.