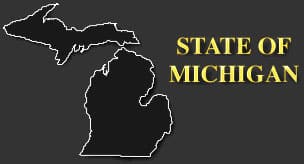 4/13/2012 – Mandatory Helmet Law repealed and signed into law by Governor Rick Snyder. The new law states that riders 21 years and older who have 2 years riding experience, passed the motorcycle Safety Course and carry $20,000 of medical insurance can ride without a helmet.

Feb 25, 1999 – Riding without a helmet in Michigan is a Civil Infraction, and the fine can be as much as $100.00, plus $100.00 court cost, However each County can set there own fine for this infraction. In Montcalm, Ionia, and Ottawa County, the fine is $55.00 w/no court cost, in Kent County it is $35.00. with no court costs. In Houghton County, a citation for no helmet is an $85 fine with no court cost. A rider would have to check with each counties District court to determine for sure what the fine in there area is. The fine doesn’t go up for further tickets. (Info thanks to Chuck Ross and Thomas E. Davis)

Title XVI. Motor Vehicles. Chapter 189. Traffic Regulations; Vehicle Equipment and Storage. Section 189.285 Regulations for Operating and Riding On Motorcycles. :” . . . Crash helmets shall be approved by the department of state police. The department of state police shall promulgate rules for the implementation of this section pursuant to the administrative procedures act of 1969, Act No. 306 of the Public Acts of 1969, being sections 24.201 to 24.315 of the Michigan Compiled laws. Rules in effect on June 1, 1970, shall apply to helmets required by this act. . . .”

“Amendment to Motor Vehicle Code by P.A.1966, No. 207, adding the section requiring motorcyclists and riders to wear crash helmets was unconstitutional since it had no relationship to the public health, safety and welfare, although it had a relationship to protection of individual motorcyclist from himself.” American Motorcycle Ass’n v. Davids (1968) 158 N.W.2d 72, 11 Mich.App. 351.”The state has a substantial interest in highway safety.” American Motorcycle Ass’n v. Davids (1968) 158 N.W.2d 72, 11 Mich.App. 351.

“An ordinance requiring a motorcyclist to wear a crash helmet is a creative, relatively nonintrusive response of government to protect the public from detrimental technological change, and since wearing a helmet is a minor burden, the effects of which benefit not only both parties involved in an accident, but society as a whole, since enforcement is open and public, and since cost of the helmet is not only low, but technologically simple to achieve, ordinance does not constitute an unlawful invasion of individual rights, but represents a valid exercise of the police power.” People of City of Adrian v. Poucher (1976) 247 N.W.2d 798, 398 Mich. 316.

“The exercise of the police power in respect to highway safety interferes with the personal liberties of some citizens, but changes in transportation, including the increase in the number of motorcycles, have expanded the permissible legislative infringement on individual liberties in the area of highway safety to protect the public safety and the common welfare.” People of City of Adrian v. Poucher (1976) 247 N.W.2d 798, 398 Mich. 316.

As of Jan 2011 a new Helmet repeal bill has been introduced in the House of Representatives in Michigan HB 4008. However Abate of Michigan Inc. doesn’t support this bill and will have their Senate Bill introduced later in the month of Feb or mar. 2011.

Referred to the House Transportation Committee on January 13, 2011.

Legal Loophole In Helmet Law? – Michigan law requires bikers to wear helmets, however police are concerned about a loophole in the law that won’t allow them to pull over bikers without helmets.